Shewbird Mountain towers in the Southwestern corner of Clay County, NC.  The name came after the shape of a flying bird.  Others think the mountain was named for a Cherokee chief, Shewbird, who lived in a cabin on the ridge.

My father and his family lived at the foot of the mountain in the Matheson Cove.  At one time, Great-Granddaddy Dallas Matheson owned the entire 600 acres of Shewbird Mountain and raised an apple orchard above the frost line.

Each spring the Ledford family hiked to the top of Shewbird Mountain and had a picnic.  They could view both Georgia and North Carolina from the ridge line.

After their picnic on Shewbird, the girls would write notes to boyfriends and leave them between the boulders at the Devil's Post Office.  That was a cave located on the mountainside.

My father and his brothers would hunt for ginseng in the woods.  They never took all the plants from one spot, but some folks stripped the sane from the land until it became extinct.

The Cherokee Indians first owned this land.  When they harvested plants, the Cherokee would apologize for taking them.  They would always leave ginseng to grow back the next season.

Because the ginseng root resembled the human body, the mountain folks used it as a home remedy for all ailments that afflicted them.  The bitter herb was more valuable than gold and exported to China.  Besides using ginseng for medicinal purposes, many mountain folks supplemented their income by harvesting this plant.

I enjoyed your writing so much. Thank you for sharing with us.
We are having a rainy day in GA!

Love this story Brenda.. My brothers used to hunt for it and sell it to people that bought it to send to companies that made lots of things out of it.

Wonderful story, Brenda! Congratulations on having it published!

Very interesting! I always enjoy reading stories like this...especially when it has to do with family history!

I find it interesting how some folks think they have a right to take all the plants and then leave nothing for future generations.

I enjoyed this, Brenda. I've never seen this plant, and don't know if it grows on our mountains, but I have watched TV shows about it.

This is so interesting about the ginseng. That must have been a breathtaking view from the top of the mountain. I remember climbing Brasstown Bald and feeling like I was seeing all of north Georgia.

This is so interesting! My husband and I would love living in the NC mountains. In fact, we were on Craigslist this morning looking at small farms for sale. It will probably never happen, but we dream about it.

I drove my husband to your area today. Just wanted to say that I thought of you while visiting. You live in a beautiful area. I appreciate your blog friendship. Blessings, Mildred

Interesting, Brenda. My grandpa used to hunt ginseng. Sounds like you live in a beautiful place.

Good story, Brenda. I have never seen ginseng but I know it is lauded for health reasons. You have so much information about these mountains that you can share. Thanks for doing so.

That is so interesting, Brenda! I read the Foxfire books years ago, and I love reading about the old folk medicine and the herbs and plants growing free in the woods if you know where to look. Our forefathers (and mothers) knew a lot that we do not! 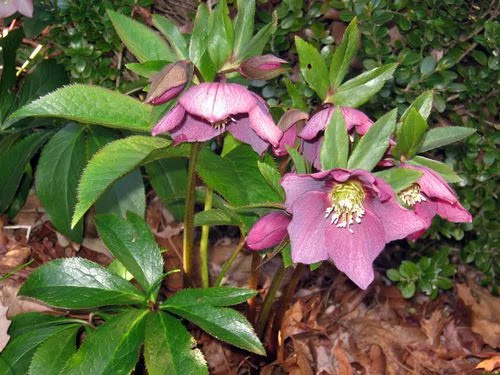